Trending
You are at:Home»Himalayanam»Day 1 – The Himalayan journey with our Great Master

” Himalayas ” The Himalayan Mountains are the Energy centres for the entire planet. From the disciples of Lord Shiva to the many ascetics in severe penance, the Himalayas have stood as pure energy centres for Meditation. The Himalayas have been preserving the Indian Yogic Knowledge, the Mystical Secrets of the Yoga and the exceptional Yogic practices that take place in the secret caves far away from the outside world for ages. Those who have heard and read about the beauty of these Mountains will always have the desire to go there. For the well – being and welfare of Humanity, Lord Shiva Initiated Parvathi Devi and the Sapta Rishis in the Himalayan ranges into this powerful Kriya Yoga practice. In the modern era the Kriya Yoga was first offered as initiation to Shri Lahiri Mahasayaji in the Himalayas. The Himalayan Mountains are the symbol of solidarity and the Spiritual wealth of India. Just as the transformation of the human spine, through deep Yogic practices into diamond like state, stand the Himalayas, tall and mighty.

Pujyasri Aathmanandamayi ji is the Sidda Guru who bestowed Sushumna Kriya Yoga from the Himalayas to the human race, which is going through the journey of life at a rapid pace and is continually guiding them towards the right path.

In 2016, the youthful brigade and few other followers of Pujyasri Aathmanandamayi ji got a golden opportunity to go along with their Guru on a Himalayan Yatra. Details of the Himalayan Yatra will be given starting tomorrow. 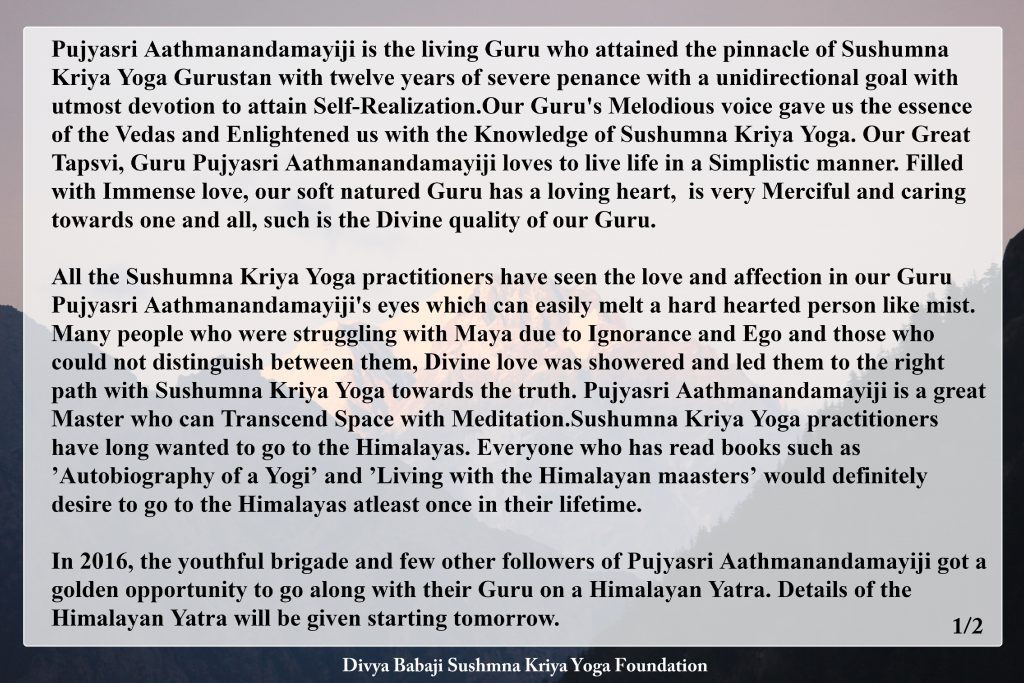