Trending
You are at:Home»Himalayanam»Day 15 – The Five Vows

It seemed like Shyamala Devi the Goddess of Nature herself had gorgeously summoned her own children to this place. There was an uphill slope en route to this place which was very slippery and was not comfortable and safe to walk with our footwear on. So the Ladies removed their footwear and holding them in their hands, slowly and carefully moved forward by helping each other. It was surprising to see the ease and pace at which Mataji was climbing the steep slope. We reached the place where the photos of Guru’s were already arranged. It was an uneven terrain with lots of hard rocks and mud as it was close to the river stream.Mataji  asked all of us to be seated in a particular configuration so as to form a big circle.All of us sat down on napkins, kerchiefs or whatever we had with and formed a big circle. We had no clue as to why we were asked to come to this place even at that point of time. Before starting our Meditation, Mataji instructed us not to open our eyes. For the very first time, Mataji made everyone of us to take a VOW of Five very important undertakings.
1. To have extreme faith in the Guru’s of Sushumna Kriya Yoga.
2. To effectively oblige and execute each and every responsibility entrusted upon us.
3. To respect co – Kriya Yogis.
4. To never indulge in any activities which would potentially defame Divya Babaji Sushumna Kriya Yoga Foundation.
5. To live every moment in our life to achieve Nirvana. We all took the VOWS. Mataji also said that the acts which are about to be performed by our Supreme Masters will be effective only to those who are committed to fulfill their VOWS unconditionally all along. As we started to Meditate a fierce wind started blowing. Mataji cautioned us not to open our eyes to see what was happening which we followed without hesitation. After a while the wind calmed down. There was complete silence. After Meditation was completed, Mataji asked us to open our eyes and Mataji got up and went near those huge Pine Trees. Mataji started to caress the trees lovingly like a mother caressing a little baby’s head. We could not understand or comprend anything. Few more of these trees were in a downhill slope and Mataji was stepping deep down into the steep slope which was uneven, very mushy and wet. Our hearts started to pound with the fear of Mataji slipping on the uneven dangerous terrain. 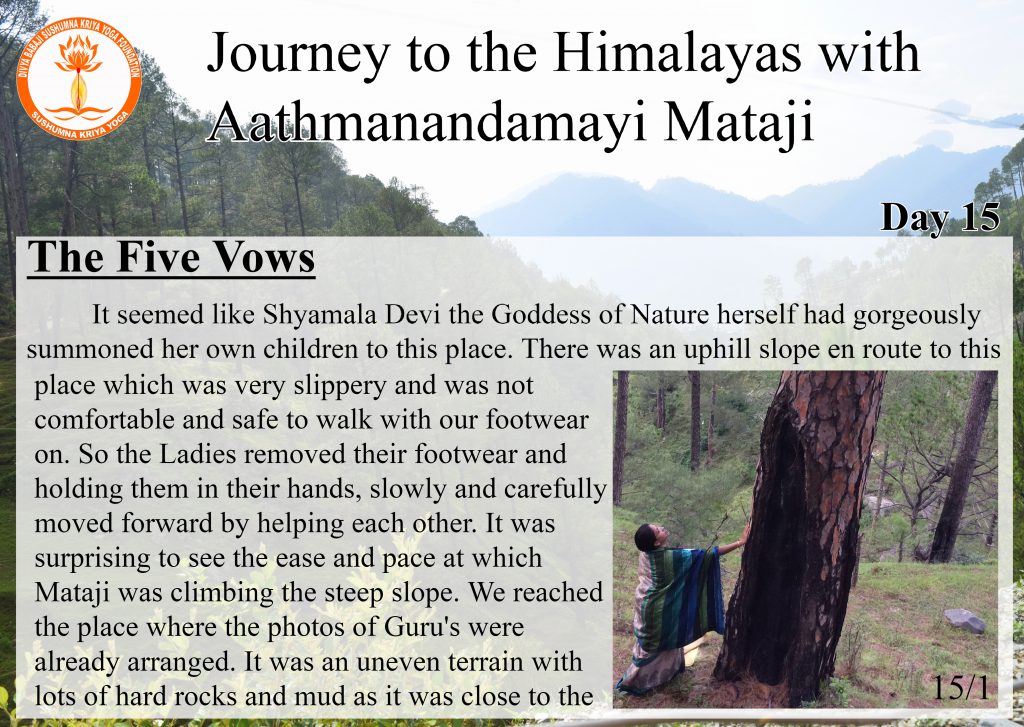