Trending
You are at:Home»Himalayanam»Day 35 – The divine Stones of the Ganges

After coming out of the Meditative state, Mataji walked very fast towards the river Ganges and got down into the river. We had no clue of what Mataji was doing. We all followed Mataji and stood on the river bank. From the flowing water Mataji took out stones and began to give them to the disciples. Some of us were standing  close to Mataji. We were indeed surprised to see Mataji standing in the cold waters of the Ganges without even knowing about the depth of the river in that place. The flow of the Ganges was very swift there.The temperature was biting cold. Mataji stood in the water without quivering or shivering. The water of Ganges was so pure. Mataji stood in the cold water and handed us the stones that she picked out from the sacred river. The stones were in different shapes and sizes. All of us quickly went and received the stones that Mataji gave us.Mataji stood in the water for about 10 minutes. As the water was too cold the stones which were being handed to us were also very cold. We were astonished as to how Mataji could stay inside the cold water for so long. On that day all of us saw a different state of Mataji. After the process was complete Mataji moved very fast from that place. None of the Sushumana Kriya Yogis were able to match the pace of Mataji. The memories of that incident are still etched in my heart. From there Mataji went back to the cottage. Mataji kept fasting and did not take even water to drink. Mataji remained silent and was in a state of trance. 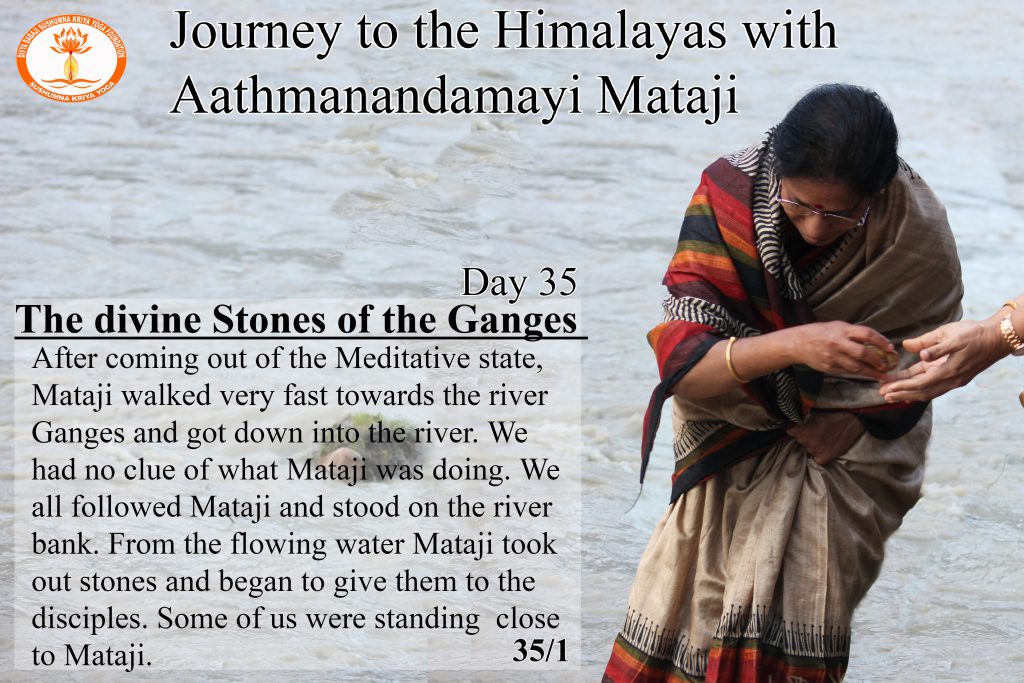