Pingala is Surya Nadi and  Ida is Chandra Nadi, this is what Yogic science tells us. Similarly, it is also known that the Yamuna and Ganga rivers represent the Surya nadi and Chandranadi respectively. Prayag is the place where these heavenly rivers streaming down from the foot hills of Himalayan mountains amalgamate into one. River Saraswati is the one which flows amidst both Yamuna and Ganga and represents Sushumna Nadi, the supreme. The amalgamation of these three rivers corresponds to the union of the three Nadis. Triveni Sangam is the holy place where rivers Ganga, Yamuna and Saraswati amalgamate and thus when taken a holy dip, we get blessings of all three rivers, Yamuna, the negative karma buster; Ganga, the presenter of Nirvana and Saraswathi, the ultimate Energy shower. During this period of Kumbhamela at Prayag, the place where divine rivers amalgamate, when all Sushumna Kriya Yogis execute the powerful 49-day procedure ordered by Sri Sri Sri Mahavatar Babaji, they will be entitled for all the good deeds which would be received when taking a holy dip at the Prayag Kumbhamela. 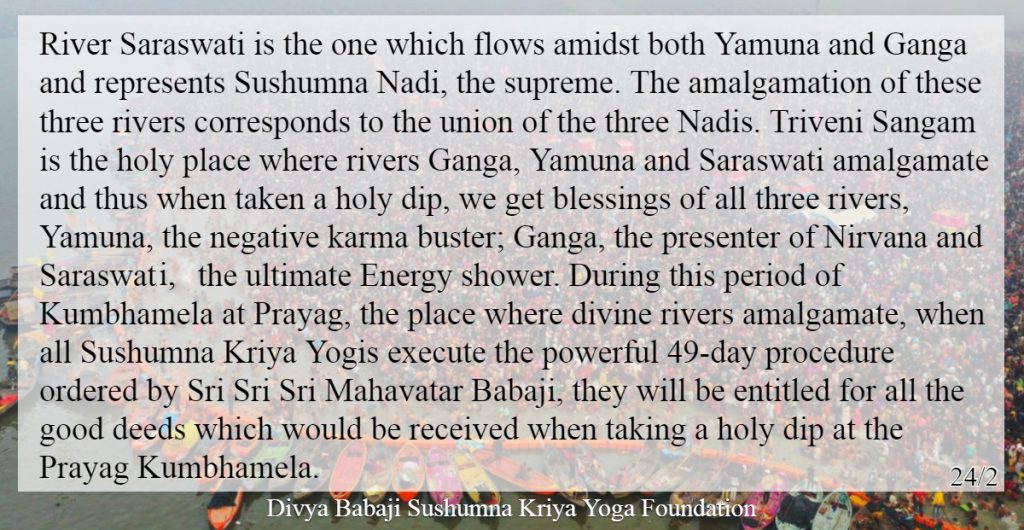