Trending
You are at:Home»Himalayanam»Day 28 – The Defiled Yamuna – devastates Mataji

Despite the trek all the way to the top of the Yamuna, we could not perform our ablutions. This was due to the pathetic hygiene of such a sacred place, through human contamination by throwing clothes, littering and  throwing plastic around. Seeing this, a deeply saddened Mataji, transformed as if into the destructive vehemence of the Goddess Kali, who spares no sinners. She was upset on man’s apathy towards nature, and the shameless exploitation and spoiling of the environment. To reflect on man’s carelessness and callous attitude, a visibly upset Mataji, informed us not to disturb and isolated herself into the tent for half an hour. While She reminisced on man’s lack of awareness and ignorance, in bringing the river to such a terrible condition, all of us fell silent. After the breakfast that morning, She did not have a morsel of food. By and by it turned into evening. As we eagerly waited outside, after half an hour Mataji came out of her tent and told everyone to pack and start.

Breaking Her silence, She shared the reason thus – “I felt devastated that the serene river had been polluted beyond recognition from three births ago. I was disturbed”. That day, Mataji declared to all Sushmna Kriya Yogis that if they bathe in any river, stream or ocean, they should not pollute it with any material such as their clothes. Mataji asserted that we should never be responsible for contamination of nature as Sushumna Kriya Yogis. To the extent possible, She urged us to create an awareness amongst our family members too. Then we started our trip back to the tents. By then it was dusk and Mataji already set along downhill on foot. We her disciples persuaded and convinced her to ride down on a palanquin. Few of the youngsters, trotted following Mataji’s doli down the mountain. Some of us dreary due to the day-long walking managed to drag along slowly. Having walked some distance, we lost our way. There wasn’t another soul around. A dog appeared from nowhere and led us on to the right path. Believing this herald might be the holy God Kala-Bhairava we offered our salutations to it. We recalled there were many co-travellers in our climb up the Yamunotri, but on our journey down certain places were fully deserted.

That day we had a very strange experience. While we were surrounded with towering mountains, huge trees, mighty waterfalls, deep valleys, rippling river, etc. we realized our insignificance. It seemed as if we were engulfed amidst giants, captivated by nature, in a subtle way. Though walking alone, we were unconcerned by the fear of death, untouched by the unknown and went ahead with courage, as if being guided by an unseen power that instilled confidence.

“The hum of bees stimulating the florets to blossom is the cosmic OMmm,
The chirping of the birds declaring the dawn is the root word Ayimmm,
The gentle lullaby of the winds caress is the esoteric Greemmm,
The chatter of the stream, as it trips and falls from crowns of the hills is Sreemmm”

Engrossed in these surreal sounds, like the charms of the divine poets’ recitation, we were rejoicing and relishing the beauty of nature’s poetry through the sounds of the “Bijakshara”. Lost in the joy of this blissful experience, we went frolicking back to the bus and started off to Harshil. 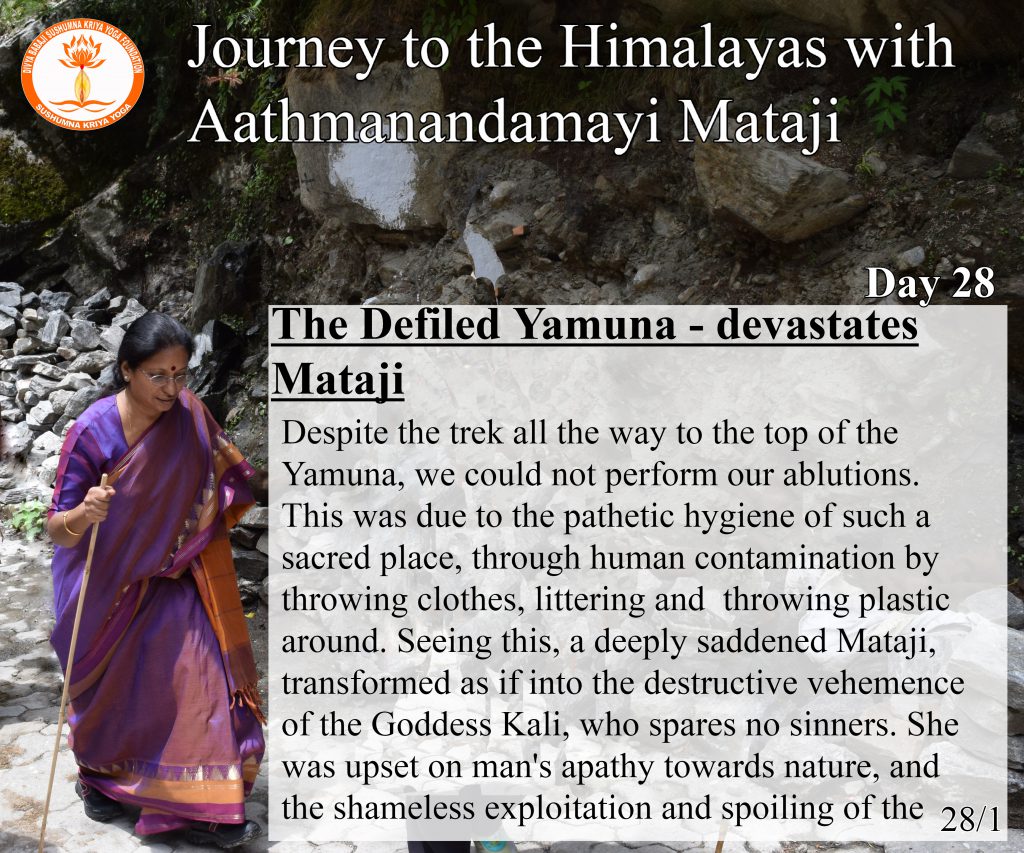 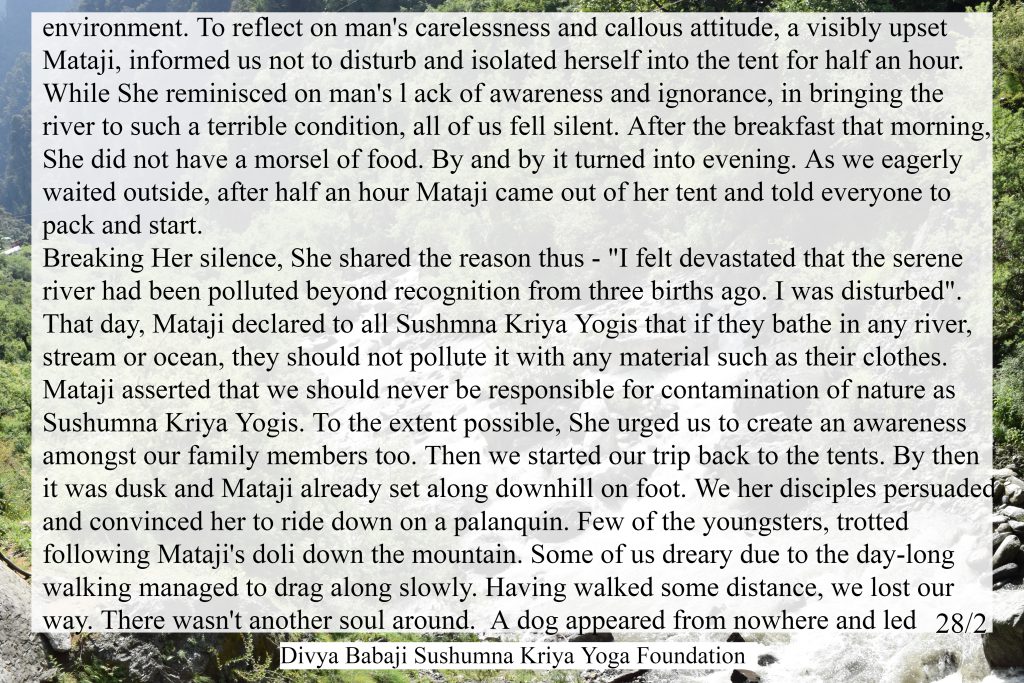 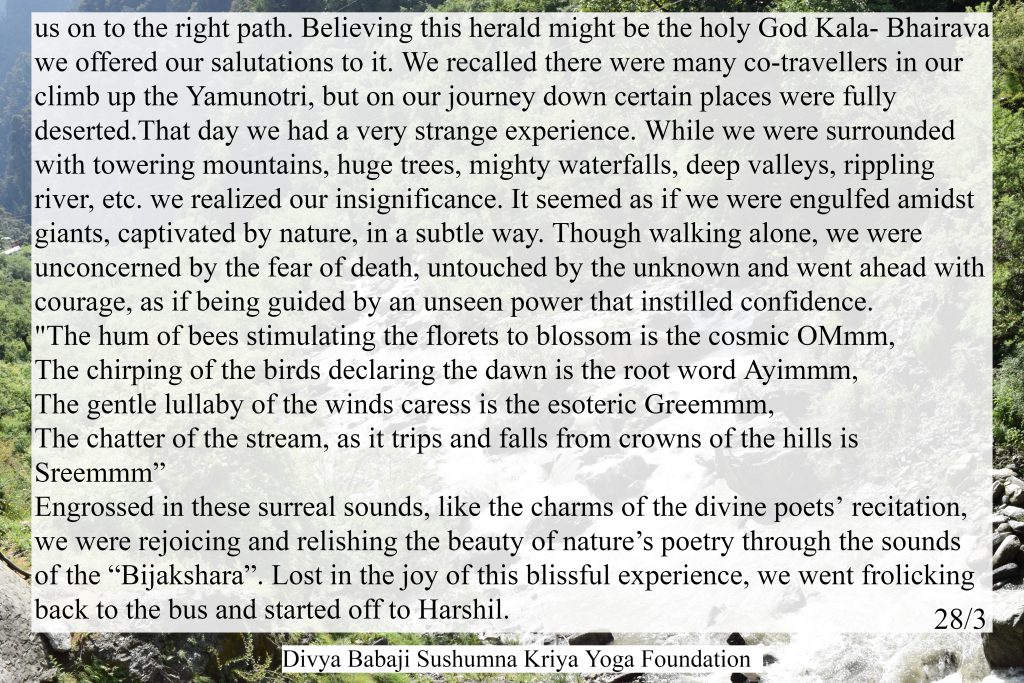